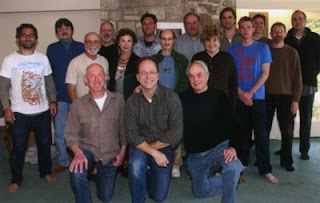 Chris Knowles provides an excellent summary of a symposium on "superpowers" I attended at Esalen Institute in Big Sur last week. I am used to attending scientific conferences, which are often heavy on details, data and statistics. By contrast, this meeting was heavy on the humanities and light on science, a challenging but very refreshing change for me.  My talk was entitled "Reality 3.3," in which I attempted to show how our models of common sense have evolved over time. I identified 3 major shifts in historical worldviews, and I speculated about a 4th (Reality 4.0) that is almost on the horizon.
The most startling part of the meeting for me was when Jacques Vallee spoke in detail about a UFO flap in Brazil. I hadn't realized the extent to which the Brazilian military was involved in studying that case, which persisted for three months, or the strength of the evidence, some of which is still classified.
Posted by Dean Radin at 2:27 PM

"The most startling part of the meeting for me was when Jacques Vallee spoke in detail about a UFO flap in Brazil."

Some of us have started a new on-line forum for discussions on topics including parapsychology, psychical research, consciousness studies, Ufology and more.

The charter says the forum is for people who accept the validity of paranormal phenomena and want to disucss them without being distracted by debates on whether the phenomena are real or not.

A look at the members list will show some familiar names and some new ones, but the more people who join in the better. I hope many of you who are reading this will take a look at the forum and if you agree with the charter, will join us in the discussions.

The forum is located at:

Jacques exploded commonly held myths about the Middle Ages and showed that there was a period of Enlightenment in the 11th and 12th Centuries that produced these masterpieces along with mystic visionaries like Hildegarde and Meister Eckhart.
I generally enjoy that kind of talk. I'll have to look for Vallee's books.

Jacques talked more generally about the Middle Ages- I was simply adding some color commentary on what this period produced, since Jacques' talk was primarily oriented towrds art and architecture. Check out the link to the Rushkoff piece as well.

Thanks for the link, Dean- and thanks for your presentation as well. I am in awe, as always.

Kind of strange you bumping into Vallee after that "heated" ufology thread here very recently, or maybe not, after all you would expect him to be there, at a conference at Esalen.

I've always been amazed at how Vallee achieved so much so very young, in several scientific disciplines. By the time he was thirty he had done so much in his own field of computer science (you know just doing work on ARPANET at SRI that laid the basis for much of the internet no biggie) and astronomy. Oh yeah and on the side had written by age thirty three landmark scientific books on ufology (Passport to Magonia was published when he was that age - 30 or 31 maybe - it still remains the classic watershed publication of genuine ufological science). Oh and he also helped to get the ball rolling with remote viewing experimentation at SRI about that time, or soon after, by the by.

By the time I was thirty, I had done what exactly? Hmm this is depressing, best not to compare myself to geniuses like Vallee or anybody really...