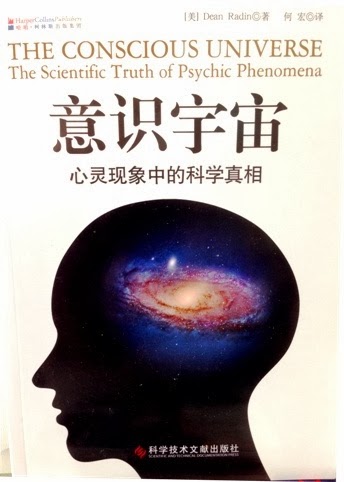 With this latest publication The Conscious Universe, Entangled Minds and Supernormal have collectively been translated into Chinese, French, Portuguese, Italian, Russian, Korean, Japanese, Turkish and Arabic, with (I've heard) German, Finnish, Czech, Greek, and Bulgarian possibly in the works.
Posted by Dean Radin at 4:08 PM

Great stuff, Dean. I have spent a dozen years in the greater China region, and have given quite a few talks. My spoken Chinese isn't too bad. I come at the issue of consciousness and psi from the perspective of a futurist. My doctorate is in Futures Studies, and I have written quite a few papers for Tamkang University's Journal of Futures Studies (Taiwan), mostly about what I term integrated intelligence (basically a more definitive version of spiritual intelligence which identifies specific cognitive functions). I plan to to a tour of the region again soon, aiming at working with various businesses. I will be happy to introduce them to The Conscious Universe, and I will certainly mention your work in general. I feel there's a real interest in such ideas in China, so I am sure TCU will be received well.

what is your opinion about irreducible mind?

Irreducible Mind is a great book. Well worth reading.

I hope it's a good translation. Your book was a real revelation to me.

My compliments Dean. Who know if the Chinese culture will be less "resistant" to accept A Conscious Universe vision.

Patrizio, you will find that the Chinese are very open to such ideas, generally speaking. But there are some subtle distinctions in modern China that people who want to do this kind of work should be aware of. The Chinese are very practical minded. Some might even say "materialistic". Whatever you call it, the average Chinese person is mostly interested in acquiring prosperity and status. To be honest, the way I look at it, most Chinese "spirituality" is very similar to New Ageism. When they look at a concept, they want to know what it can do for them. It is not a very self-reflective culture. But it's a huge country, and there are many exceptions. If you tap into the Buddhist communities, for example, you will find almost the complete reverse of dominant culture.

Another small issue is that the official state doctrine is one of "scientific development", and that includes a strong emphasis upon eliminating "superstition". So there may be some resistance from official circles. But in practice, as long as you don't go around being aggressively anti-government or anti-Chinese, then you will almost certainly be OK. Some here might be interested in this blog post of mine, if Dean is OK with my sharing it here. It tells the story of my participation ina mindfulness workshop near Beijing with 130 Chinese people. I was the only foreigner there. http://www.resonantfutures.com/blog/marcus-anthony/awakening-to-the-spirit-of-china