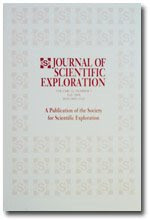 Downloadable pdfs of many of the articles that have appeared in the Journal of Scientific Exploration are now available from the society's new website. The articles can be found here.

That is quite literally the best news I have had all day. I had long wanted to acquaint myself with that journal, but the expense of a subscription had held me back.

Mr. Radin, I found in internet some arguments against the status of Parapsychology as a Science. I don't think they are valid, but I would like to know your opinion;

a) It is often argued by "True Believers" that parapsychology is recognized as a science since the Parapsychological Association (PA) is an elected affiliate of the American Association for the Advancement of Science (AAAS). That seems impressive, but then, the American Alpine Club is an AAAS affiliate as well. Both the PA and the Alpine Club sponsor research, but if rock climbing isn't a recognized area of science, then AAAS affiliation is no reason to say that parapsychology is one either.

I think the argument is not valid because Parapsychology is present at many Universities, and rock climbing is not.

b)AAAS accepted Parapsychology as a Science, but the Royal Society don't.

I dont know if b) is true, but if is, is there any movement trying to insert the Parapsychological Association in the Royal Society?

The AAAS, and I, believe that science is about systematic ways of exploring the natural world. That includes thousands of different approaches, which is why there are tens of thousands of peer-reviewed scientific journals being published.

To my knowledge no one has proposed that parapsychology become part of the Royal Society. But the late Prof. Robert Morris, head of the Koestler Parapsychology Unit at the University of Edinburgh from 1985 to 2004, was President of the Psychology Section of the British Association for the Advancement of Science.

The angst aroused in true disbelievers by the fact that parapsychology is a genuine science deserves serious study. What are they afraid of?

The angst aroused in true disbelievers by the fact that parapsychology is a genuine science deserves serious study. What are they afraid of?

They are afraid of existential breakdown. I've talked to some this have happened to the other way around. They actually got anxiety attacks and dropped out of studies because of it. They felt their view of the universe was being erased and replaced by the "truth". This truth was that the universe was a random, deterministic place, where even their own mind didn't have any real existence. They felt reduced to insignificant machines. This then led to severe depression.

I think this must work both ways. Those that think the universe is safe and describable using objective concepts only, will get a deep anxiety when their world view is threatened by psi research (or certain results from QM). I guess it's human nature.

I realise that your point (a) did not represent your own views, but isn't it incredible that despite science's supposed objectivity, the validity of a whole area of study is assessed on the basis of club membership!

"In" subjects get published in respectable journals, and psi has to make do with other journals, that then don't count as proper scientific journals because they publish such stuff.

This, of course, leads in turn to the conclusion that psi is not a proper scientific discipline because it can't get (most of) its papers published in the respected journals!

There is a very simple definition of science that arises from the history of science. Science began when people started to make direct observations and experiments to try to determine whether what the ancient authorities and local superstitions said was true or false. Thus the simple definition of science is "testing a hypothesis". Science is really a process not, as some people would like to make others believe, a licensed profession. You don't need a license from a university, the government, or a professional organization to do science. Science can be as simple as when a cook tries to improve a recipe by modifying it. To say that this or that field is or isn't a science completely misses this point. It is what the scientist is doing not what they are interested in.

Whoever that the rock climbing isn't a science and therefore being an AAAS affiliate doesn't mean an affiliate is engaged in science should have checked his facts first. AAAS affiliates are involved in science. Here is the criteria for affiliation with that AAAS:


"Criteria for Affiliation of Organizations with the AAAS


The objectives of the AAAS are: "to further the work of scientists, to facilitate cooperation among them, to foster scientific freedom and responsibility, to improve the effectiveness of science in the promotion of human welfare, and to increase public understanding and appreciation of the importance and promise of the methods of science in human progress."


Here is information about the American Alpine Club which shows that it is involved in scientific research:

"RESEARCH. This research grant, supported by the American Alpine Club, awards over $4000 to worthy students studying general science, Biology, Environmental Science, or Forestry. Seven awards are usually presented to applicants, with their monetary value ranging from $496 to $1000. The applications, consisting of a research proposal, are evaluated based on their scientific or technical merit and their contribution to the alpines. The application deadline is March 1, and the Notification Deadline is June 1."


It is slightly ironic that someone would make statements about what is or isn't science when they themselvesare not in the habit of checking the validity of their own preconcieved ideas before they state them as facts. It is so easy to do that with access to the internet. It seems that despite the success of science, with some people, many skeptics included, superstition still wins out over facts.

The one canard that I've heard a lot is that being a member of the AAAS simply means that there are several people interested in the subject, that's all. To which my response is: Intelligent Design isn't a member of the AAAS, are you *seriously* telling me this is because of lack of interest?

Dear Mr. Radin, I comment on your blog to get in contact with you. I have spent the 5 last years searching for answers beyond the scientific rules of research because I mean that they are the true obtacles for humanity to find answers for the greatest challenges. My work is presented at my website www.earthgrids.com I think you may be interested. Today I connect directly to the highest levels of consciousness of our universe... which is a consciousness universe. The physical Universe that science explore is only a skeleton of the numerous universes that exsist. There are many univereses inside universes also. We have long enough limited ourselves a species by only diging into ONE of the three bacis energies there is... To move on we need to give focus at our feelings and throughs. The three basic energies in existence are physical enegy, mental energy (thoughts) and soul / feeling energy (love)