From a recent Amazon.com reader review of The Conscious Universe. This review provides a nice demonstration of the confirmation bias: If you believe that psi does not exist, but then you encounter evidence indicating that psi does exist, the confirmation bias will cause you to find reasons to reject the positive evidence, which in turn will make you more convinced -- and hence confirms -- that your original hypothesis was correct. Because this bias is rife throughout science, I discuss it and other biases in The Conscious Universe.

Incidentally, I doubt that the reviewer read the book carefully, because I never, ever use the term PSI. The correct word is psi. The reviewer writes (excerpt):

The main reason why I found this book unconvincing is that if PSI existed it would be easy to demonstrate. No meta-analysis of a huge number of studies is needed, one good experiment suffices.

This argument might seem appealing, except for one very important problem: Human performance is highly variable, even among those with world-class talent. E.g., some people claim to be able to hit baseballs thrown at them at 90 miles/hour. If that obviously ridiculous claim is true (because human reaction time is far too slow to hit such a fast-moving object), then it would be easy to demonstrate. We shouldn't need fancy baseball statistics. One good swing of a bat ought to prove the claim once and for all.

Back to the real world, we know that the best baseball players in the world get a hit only about once every three times at bat. If our skeptic happened to look at the plate only when the batter missed the ball, which was the majority of the time, he'd conclude that the baseball claim is false. Especially if he distrusted statistics.

The fact is that many excellent, highly significant experiments have been published, but "one good experiment" isn't convincing (and shouldn't be) because the results might have been due to an undiscovered flaw. This is why independent repeatability is important in science, but also why we always need a way to measure replication rates. Thus the need for meta-analysis. There's no way to escape this because all measurements contain error.

The test I found most impressive is also the simplest one: to have subjects mentally affect the result of random number generators. This experiment is easy and cheap to set up, is so simple that errors can easily be removed, and is easy to reproduce (the book claims that all subjects were successful in nudging the RNG outside of its operational parameters). If it works it would prove that PSI is real.

The book absolutely does not claim that all subjects are successful in these tests, nor does it claim that this is an easily reproducible effect. But the fact remains that some individual RNG experiments have provided extremely strong evidence in favor of psi, and yet as noted above skeptics dismiss those studies.

The fact that PSI believers instead of concentrating on one simple experiment are instead all over the place describing results of disparate, old, and complex studies is a bad sign.

This assumes that all researchers are clones and interested in exactly the same thing. Well, cancer is a very important health problem, but does that mean all biologists should be working exclusively on cancer research? Of course not. Researchers decide what they wish to focus on for dozens of reasons. Discomfort about "disparate, old, and complex" studies indicates a disinterest in history, avoidance of published experiments with strong results, and inability or unwillingness to understand experimental details that provide confidence that results are what they appear to be.

Another way to easily prove the existence of PSI would by using casino statistics. If there is one place where PSI should be present it is there. The author got some daily data about the money dropped and money won at different games such as roulette. If he had only gotten data about the number of roulette plays he could have easily demonstrated that the money won was more than expected thus demonstrating PSI. In the book he claims that casinos are reluctant to share such data, but I wonder why.

Do you know of any business that freely shares its detailed profit/loss details with anyone who asks? I don't. Casinos in particular are extremely tight-fisted about their data because they deal in cash. Public lottery information is another matter. For that data a few large studies have been conducted, as I describe in the book, and in fact they do provide evidence for psi.

So in conclusion, even this book did educate me about the arguments in favor of PSI and made me wonder and think about this issue, the net effect has been to strengthen my belief that PSI does not exist.

Lo! The confirmation bias at work.

This is the cover of the Turkish translation of The Conscious Universe, published in 2005. Someone must have forgotten to inform me that this edition was out, as I discovered it by accident. I ran across the book jacket image while surfing, and thought it looked familiar. Then I looked more closely and saw that my name was on the cover!
Posted by Dean Radin at 7:55 PM No comments:

New Down the Rabbit Hole poster 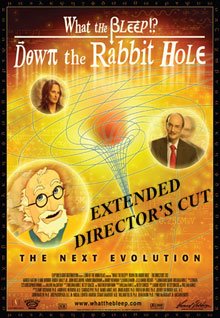 This is the new marquee poster for the Bleep movie, emphasizing that it's an extended director's cut, and not -- as some people apparently thought -- an entirely new movie.
Posted by Dean Radin at 7:52 PM No comments:

Who should see "Down the Rabbit Hole"

Certain kinds of people shouldn't see the movie, What the Bleep: Down the Rabbit Hole. If you have no interest in questions like "Who am I," "What is consciousness," or "What is the nature of reality," then don't waste your time seeing this film. If you think meditation and yoga are New Age nonsense, then don't waste your money. If you are devoted to a traditional religious doctrine, then don't even think about seeing this film. If you are a scientist who believes that the current scientific picture of the universe is essentially complete, then avoid this film as it will make you angry. If you believe that psychic and mystical experiences are completely explanable as the delusions of the ignorant, don't waste your time. In short, if you are a devotee of orthodoxy, do not see this film.

On the other hand, if you are interested in the big philosophical questions, practice meditation or yoga, are naturally intuitive, do not believe that science completely explains everything worth understanding, or are interested in heterodoxy, then you would probably enjoy this film.
Posted by Dean Radin at 3:47 PM 13 comments:

Here's a children's book on ESP that I was a consultant for, published in January 2006. Click on the image to jump to it at Barnes and Noble.
Posted by Dean Radin at 10:30 PM No comments:

I attended the San Francisco premier of Down the Rabbit Hole last night. The theater was at maximum capacity (about 400 people). The movie itself is long (2 hours 40 minutes) and is essentially an extended version of the original What the Bleep, with some very good new animation and nearly all new interviews. Those expecting an entirely new film will be disappointed, but if you're looking for a more in-depth version of the first film you'll be satisfied. For those who still can't get enough, a 5 hour DVD version is in the works.

Realistically you're not going to learn quantum mechanics from watching this film, or for that matter the biochemistry of addiction, or the mystical foundations of religion, or the ontological implications of living in a holistic universe. But it's an entertaining introduction to very some complex and fascinating topics.

After the show, Mark Vincente (the director), Fred Alan Wolf and I did a Q&A with the audience for about an hour. This film has clearly touched some people very deeply, and if nothing else it gets people thinking seriously about some of the "big questions." I don't recall the last time I've seen a movie that encouraged an audience to think. Feel, sure. That's the bread and butter of Hollywood.

But think? That's unusual, and this movie accomplishes that goal.
Posted by Dean Radin at 10:00 PM 5 comments: