Here's an example of data collected in a ganzfeld telepathy test session. This was conducted in our lab on September 10, 2010. My friend Gail was the receiver in this test; her friend Tom was the sender. This is Gail being prepped for exposure to the ganzfeld condition. 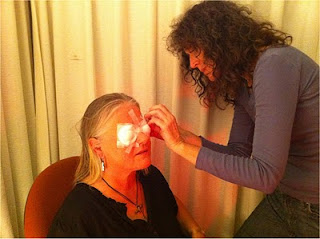 While Gail was going through a relaxation exercise, I led Tom to a distant location a floor above the lab and on the other side of the building. Once there, I gave him four opaque black envelopes, each of which had been prepared with a color photo inside, and then the four envelopes were thoroughly shuffled. Of course, neither Tom or Gail had any idea what those images might be. I gave Tom a die and asked him to toss it to get a random number 1 through 4. He did, and the photo inside that envelope became his target.

Tom then examined the photo and attempted to send it to Gail. Here is what Gail said during the 20 minute sending period, while under the Ganzfeld stimulation and listening to white noise played over headphones. Each sentence below is a continuous statement. The breaks between sentences indicate long pauses:

Something about texture. Texture.

Feel as if I'm walking around observing something, like when you would walk in an art gallery or in a museum and you would look at something.

And then I'm like a Yosemite kind of image of a tall rock or a tall, some kind of a very tall solid stone something.

Something like a feeling of walking around, looking up and being in awe, in awe of something.

Monolithic or I don't know what the word is.

I'm getting images of Mount Rushmore, I know you're not supposed to say things [Gail was asked to avoid naming her impressions, as naming is known to often pull impressions into word-association fantasies].

I sort of feel like I'm walking around in a picture, and I'm giving my hand and we're climbing up ...

or something about going up, there's ....

It seems like there's also some kind of a round tall cylinder, and, something long and gray on the right.

At first I felt very much like I was in a nature, forest type of setting, ... and now I'm feeling more

These are the four images in the target pool. Can you guess which one was the target? 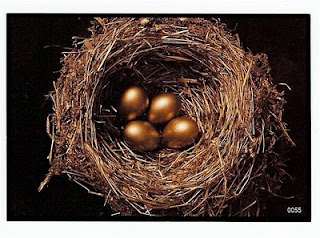 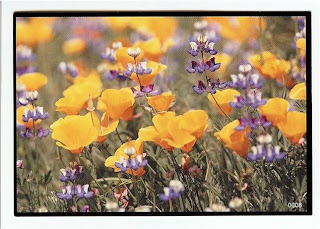 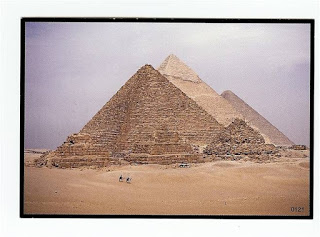 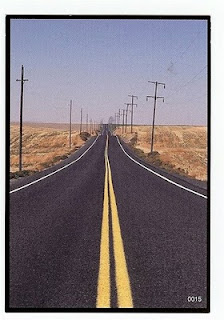 "A series of quantum experiments shows that measurements performed in the future can influence the present." Read the article in Discover magazine.

Those of us conducting and publishing experiments in presentiment and precognition have been empirically demonstrating varieties of retrocausation for decades.

I look forward to the day when prejudices decline to the point that we don't have to wait for a few physicists to seriously entertain a topic before popular science editors feel comfortable enough to report on well established empirical effects.
Posted by Dean Radin at 4:34 PM 19 comments:

Daryl Bem's article, "Feeling the future," is now in press in the Journal of Personality and Social Psychology, an American Psychological Association high impact journal. You can download a preprint of the article from here.

Feeling the Future: Experimental Evidence for Anomalous Retroactive Influences on Cognition and Affect

Cornell University
The term psi denotes anomalous processes of information or energy transfer that are currently unexplained in terms of known physical or biological mechanisms. Two variants of psi are precognition (conscious cognitive awareness) and premonition (affective apprehension) of a future event that could not otherwise be anticipated through any known inferential process. Precognition and premonition are themselves special cases of a more general phenomenon: the anomalous retroactive influence of some future event on an individual’s current responses, whether those responses are conscious or nonconscious, cognitive or affective. This article reports 9 experiments, involving more than 1,000 participants, that test for retroactive influence by “timereversing” well-established psychological effects so that the individual’s responses are obtained before the putatively causal stimulus events occur. Data are presented for 4 time-reversed effects: precognitive approach to erotic stimuli and precognitive avoidance of negative stimuli; retroactive priming; retroactive habituation; and retroactive facilitation of recall. The mean effect size (d) in psi performance across all 9 experiments was .21, and all but one of them yielded statistically significant results. The individual-difference variable of stimulus seeking, a component of extraversion, was significantly correlated with psi performance in 5 of the experiments, with participants who scored above the midpoint on a scale of stimulus seeking achieving a mean effect size of .42. Skepticism about psi, issues of replication, and theories of psi
are also discussed.
Posted by Dean Radin at 11:03 AM 21 comments: