Money for nothing (sort of)

I meditate about an hour a day. Sometimes during a meditation I get a flash of information, seemingly out of the blue. Last Friday morning I got a flash that a large sum of money was going to appear in my bank account. This money would appear unexpectedly, anonymously, and it would be large enough to make me do a double-take. I figured this money for nothing scenario was a nice fantasy, but I didn't make much of it otherwise.

Friday evening I checked my bank account (online), not expecting to see anything unusual, but I was still curious given my morning information flash. When I saw the amount in my checking account I practically fell off my chair. The modest amount I keep in the account had increased very substantially. Funds had been wired into my account a few minutes before I checked it, and because it was still a pending transaction there wasn't any information on who had sent it.

So I did indeed anonymously and unexpectedly receive a very large sum of money. As it turns out, I later discovered that this was a payment on a grant I had received last year. But it showed up this past Friday without any advance warning, and since I had received the first payment over a year ago, I had long forgotten that I was supposed to get a second payment.

Where did this information come from? It might have been sparked by an unconscious memory or concern, wondering if or when the next grant payment would arrive. That's possible, but in all past instances I've received an email or letter or phone call announcing that the payment was on its way. I've never had money just mysteriously show up. So perhaps I was responding to a precognitive hit on my startled future reaction, upon checking my account.

Whatever the explanation may be, I find it's worth paying attention to flashes of insight, because regardless of how surprising or bizarre the information may be, they often contain a kernal of truth. 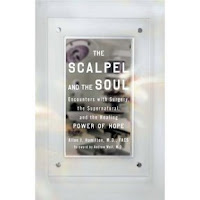 I haven't read Dr. Allan Hamilton's new book, The Scalpel and the Soul, yet, but based on hearing him in a radio interview, I am intrigued. For example, this short video clip describes a striking NDE case in one of his patients. If this clip doesn't work (it seems Firefox doesn't know what to do with this), try this page and scroll down to the link on this line: "To watch a Video Interview..."
I find it refreshing that Hamilton admits that all sorts of miraculous events (meaning extraordinary experiences) occur in hospitals all the time. But as with scientists' psi experiences, most physicians are afraid to talk about them.
Posted by Dean Radin at 3:02 PM 23 comments:

Email ThisBlogThis!Share to TwitterShare to FacebookShare to Pinterest
Labels: NDE

While surfing I ran across dedroidify and its associated blog. Such sites remind me of the exploratory spirit of Harvard psychiatrist John Mack.


These two sites are good repositories of conspiracy and consciousness-related links, videos, and commentary. I am not a big fan of most conspiracy theories, in the sense that I don't actively worry about what the Illuminati or aliens or Opus Dei may be up to. But I do think it's important to question authority.
However, I am not in favor of mindlessly overthrowing anything until the consequences of the new (paradigm, government, etc.) is better understood. Anarchy might be fun for 20 minutes, but after Shiva's passion subsides and you'd like to call out for pizza delivery, you better hope that you haven't accidentally torched the telephone system.
Posted by Dean Radin at 5:08 PM 31 comments:

The Global Oneness Project site has posted 10 short video interviews that I did in January.
Posted by Dean Radin at 12:20 PM 1 comment: