After 25 years of investigating psychic phenomena, much of it in university and industrial research settings, I've heard every criticism imaginable leveled at this topic, from rants about how telepathy supposedly violates unspecified "laws of physics," to scientists claiming that this is the work of the devil (I'm not kidding).

Some critiques are valid, and as such they've been extremely valuable in helping to advance the research. But the majority of so-called skepticism is more accurately regarded as pseudoskepticism. Such critiques are outdated, illegitmate double-standards, distortions of actual research, or flat out wrong. Pseudoskepticism is easy to sustain because it's based on opinion and hearsay. By contrast, true skepticism requires doing one's homework, and it's not easy. No wonder there's so little of it.

A few books I've found useful on the sociological challenges faced in pre-theoretical science include: Scientific Literacy and the Myth of the Scientific Method, Fatal Attractions: The Troubles With Science , Science Or Pseudoscience: Magnetic Healing, Psychic Phenomena, And Other Heterodoxies, all by Henry Bauer, former Dean of Arts and Sciences at Virginia Tech.

One society I belong to that provides a forum in which scientists can openly discuss anomalies is the Society for Scientific Exploration. I'm also President (in 2006) of the Parapsychological Association, an international scientific society interested in psychic phenomena, with the distinction that it is also an elected affiliate of the American Association for the Advancement of Science.
Posted by Dean Radin at 1:28 PM No comments: 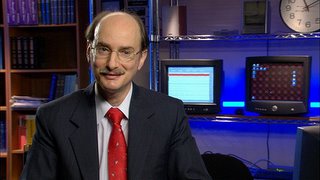 Here's a still from the new What the Bleep movie, subtitled "Down the Rabbit Hole." I was interviewed for what seemed like forever (probably about 4 hours). I don't recall the details of what I said, which will make watching the movie more interesting for me.

So far, I've done about 30 interviews for television shows. This was my second movie-related appearance. The first was for a mini-feature on remote viewing, which can be found on the DVD of the movie Suspect Zero.

I appear in the sequel to the highly successful independent film, "What the Bleep Do We Know," appearing in theaters soon. Who would have thought that a film that tackles difficult epistemological issues would be a hit? I suppose clever animation and a good sound track can make even fundamental questions in philosophy fun again.
Posted by Dean Radin at 11:40 PM No comments: