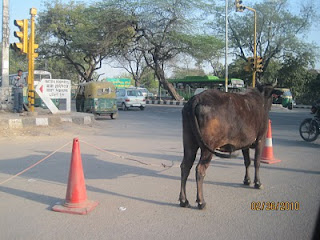 This is something you don't see very often in the USA: cows roaming around the highway. But it's not uncommon in Delhi. We also saw goats and monkeys on the road. They co-exist with the traffic remarkably well. In our trips so far it seems that violent collisions between buses, cars, motorcycles, bicycles, rickshaws, pedestrians (including little kids), and free roaming animals must happen all the time. But in spite of dozens of near-misses, we witnessed no accidents. 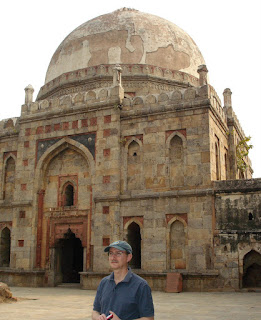 Here I am at an ancient temple in Lodhi Gardens, Delhi, India. I'm traveling in India for a few weeks, giving lectures at several universities under the auspices of the Indian Council for Philosophical Research (ICPR), an agency within India's Ministry of Human Resource Development. The ICPR selected me to be their National Visiting Professor for 2010. I'll occasionally post pictures and comments about the trip as it unfolds.


"... This contrasts with the long-held view that long-range quantum coherence between molecules cannot be sustained in complex biological systems, even at low temperatures...."


As I noted in my blog last November, the evidence for quantum coherence in living systems continues to mount. This latest advancement, reported in Nature, demonstrates that coherence not only exists in living systems, but it persists at room temperature. This contradicts long-held dogma that it is not possible to have quantum effects in living bodies. That dogma was based on assumptions about entanglement as observed in simple physics experiments, ignoring what happens when elementary things combine into new emergent properties.

My thesis in Entangled Minds was that if some form of quantum entanglement exists in living systems, then the subjective experience of that entanglement may well be what we call psi, mystical experience, or noetic experience in general. In the five years since I wrote that book (published in 2006 but mostly written in 2005), the evidence leading towards quantum psychology is marching along quite a bit faster than I had expected.

The irony in all this is that by the time I get to say "I told you so," the concept of entangled minds will become so obvious that it won't be considered controversial any more. It might take a year or two for the hoopla to settle down, but in the grand scheme of things we will have advanced from a "para" discipline to the mainstream in a flash. And likewise, centuries of past objections and skepticism about the reality of psychic and mystical experiences will also vanish in a flash.

This sea-change won't mean that everyone will start levitating on Tuesday and walking through walls on Wednesday. The phenomena may still be quite capricious and hard to control. But that will be seen as a psychological issue, i.e. the instability of undisciplined minds. And not one about existence of the phenomena.
Posted by Dean Radin at 5:15 PM 44 comments: