I was interviewed for a TV program on premonitions by ABC News 20/20. It will be broadcast on Friday October 26, 2012, and then afterwards the entire show can be seen on the ABC website.

Update (10/28/12): The broadcast program was completely different than what I had been told it would be by one of the producers. Someone at ABC News apparently thought there was too much science on the program, and as a result the show was dumbed down to the point where the content ranged between outright stupid and ridiculously silly.

This page on the ABC site makes the show newsworthy because it reports on "Evidence of Premonitions Discovered in New Study." This title refers to a meta-analysis of presentiment experiments published in the journal Frontiers in Perception Science by Northwestern University neuroscientist Julia Mossbridge, University of Padova psychologist Patrizio Tressoldi, and University of California Irvine statistician Jessica Utts.

What they analyzed were experiments similar to those I've been publishing since 1997 and describing every now and then on this blog. The paper's abstract reads:

This meta-analysis of 26 reports published between 1978 and 2010 tests an unusual hypothesis: for stimuli of two or more types that are presented in an order designed to be unpredictable and that produce different post-stimulus physiological activity, the direction of pre-stimulus physiological activity reflects the direction of post-stimulus physiological activity, resulting in an unexplained anticipatory effect. The reports we examined used one of two paradigms: (1) randomly ordered presentations of arousing vs. neutral stimuli, or (2) guessing tasks with feedback (correct vs. incorrect). Dependent variables included: electrodermal activity, heart rate, blood volume, pupil dilation, electroencephalographic activity, and blood oxygenation level dependent (BOLD) activity. To avoid including data hand-picked from multiple different analyses, no post hoc experiments were considered. The results reveal a significant overall effect with a small effect size [fixed effect: overall ES = 0.21, 95% CI = 0.15–0.27, z = 6.9, p < 2.7 × 10−12; random effects: overall (weighted) ES = 0.21, 95% CI = 0.13–0.29, z = 5.3, p < 5.7 × 10−8]. Higher quality experiments produced a quantitatively larger effect size and a greater level of significance than lower quality studies. The number of contrary unpublished reports that would be necessary to reduce the level of significance to chance (p > 0.05) was conservatively calculated to be 87 reports. We explore alternative explanations and examine the potential linkage between this unexplained anticipatory activity and other results demonstrating meaningful pre-stimulus activity preceding behaviorally relevant events. We conclude that to further examine this currently unexplained anticipatory activity, multiple replications arising from different laboratories using the same methods are necessary. The cause of this anticipatory activity, which undoubtedly lies within the realm of natural physical processes (as opposed to supernatural or paranormal ones), remains to be determined.

The parenthetical portion of the last line of the abstract is rather peculiar. As I understand it, it was added by the authors due to the concerns of at least one referee, who was apparently worried that some may see this paper as supporting evidence for an anomaly that is far too similar to what people have reported through the ages as instances of precognition.

Italian translation of The Conscious Universe 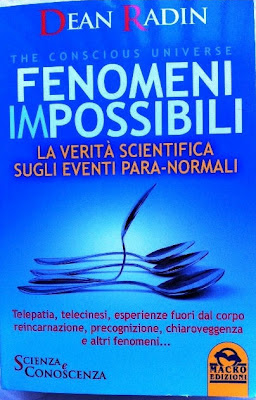 My books are now translated into Russian, French, Korean, Japanese, Portuguese, Turkish, Arabic and Italian. I like the cover of the new Italian translation because the "IM" in IMPOSSIBILI is fading away. 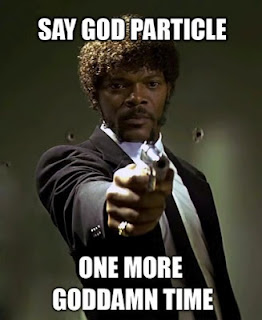 Through the Wormhole Episode

A demonstration of a presentiment experiment with a skin conductance measurement starts around minute 32.

Update (September 10, 2012): Portions of this  episode can be viewed here:
http://science.discovery.com/videos/through-the-wormhole-sixth-sense/

The entire episode can be viewed here:
http://www.cornel1801.com/bbc/THROUGH-WORMHOLE/205-there-sixth-sense.html

Consciousness and the double-slit interference pattern

Note: This article is Copyright 2012 by Physics Essays Publications.

We've completed data collection for two replications of the experiments reported in this publication. Both were statistically significant and in the predicted direction. I'm in the process now of documenting the new experiments.
Posted by Dean Radin at 5:05 PM 57 comments:

We understand that this is a sensitive subject, but it is nevertheless a claim that can be tested in scientific ways. To do this we are collecting photos of people's faces, some of whom are alive and others who are now dead. We will be studying the mediums' brain activity while they view these photos, presented in random order and with no indication of the person's present status, to see if their brains unconsciously respond differently to images of the living or the dead.

If you have photos of yourself that you would like to share for this experiment, please click here. Individuals in these photos will not be identified by name.
Posted by Dean Radin at 8:14 PM 16 comments:

From an interesting report in the Daily Grail: "... one of the greatest hypocrites of this or any other generation ...."

On behalf of my colleagues Carlos Alvarado and Christine Simmonds-Moore:


We are interested in learning more about a variety of human experiences, some of which are unusual, but are by no means uncommon in the general population. We are undertaking an online survey to explore individual differences, synesthesia (the tendency for some people to experience two senses together, e.g., colored words or numbers; tasting shapes; spatially organized calendars, etc.), and a variety of anomalous experiences (for example, extrasensory perception).


We would very much appreciate it if you would take the time to complete this online questionnaire, even if you have never experienced the things described on the questionnaire.

You may email Dr. Christine Simmonds-Moore if you have any questions about the survey. 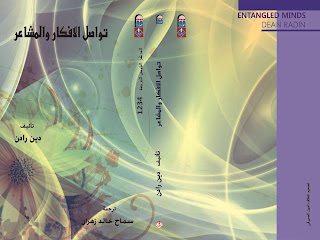 Book jacket for the Arabic translation of Entangled Minds, Arabic in the front (left) and the English title in the back (right). Thanks to Dr. Samah Khaled Zahran for performing the translation, for the cover design, and for initiating this translation. Dr. Zahran tells me that the title in Arabic is "Continuity of feelings and ideas."

My books have now been translated into French, Korean, Japanese, Portuguese, Turkish, and Arabic. I've been told that there have been queries to purchase translation rights for Chinese, Finnish, Russian, Czech, and Greek, but I haven't seen printed books in those languages yet.

Update: Thanks to a commentor for bring my attention to the unpublished Russian translation, available here:
http://www.klex.ru/a0j


From Michael Franklin, a Project Scientist in the Department of Psychological and Brain Sciences at the University of California, Santa Barbara: "We are looking for volunteers to participate in a new online precognition experiment.  What is unique about this experiment is that it uses implicit behavioral measures to predict the outcome of an online roulette spin. The actual experiment takes about 30 minutes to complete and involves some simple letter and shape discriminations.  In order to keep track of where subjects are coming from, after the experiment is initiated there is a screen where you can enter an experiment code  -- Please enter the code 'radin101'.  The experiment can be accessed here.

Also, please remember to do my online double-slit experiment, which can be accessed here.

A double-slit optical system was used to test the possible role of consciousness in the collapse of the quantum wavefunction. The ratio of the interference pattern’s double-slit to single-slit spectral power was predicted to decrease when attention was focused towards the double-slit as compared to away. Each test session consisted of 40 counterbalanced attention-towards and attention-away epochs, where each epoch lasted between 15 and 30 seconds. Data contributed by 137 people in six experiments, involving a total of 250 test sessions, indicated that on average the spectral ratio decreased as predicted (z = -4.36, p = 6 x 10-6). Another 250 control sessions conducted without observers present tested hardware, software, and analytical procedures for potential artifacts; none were identified (z = 0.43, p = 0.67).

Variables including temperature, vibration, and signal drift were also tested, and no spurious influences were identified. By contrast, factors associated with consciousness, such as meditation experience, electrocortical markers of focused attention, and psychological factors including openness and absorption significantly correlated in predicted ways with perturbations in the double-slit interference pattern. The results appear to be consistent with a consciousness-related interpretation of the quantum measurement problem.
Posted by Dean Radin at 7:53 PM 25 comments: