I flew to Madison, Wisconsin last week to participate in a fund raiser for the Deer Park Buddhist Center, where I was fortunate to hear His Holiness the Dalai Lama speak to a small group. On the way to Madison my flights were unexpectedly rerouted when I reached Denver, so I had to run around the huge Denver airport to find the gate for the next flight. As I was anxiously rushing from one terminal to another, at one point on an escalator I looked up and saw this billboard. 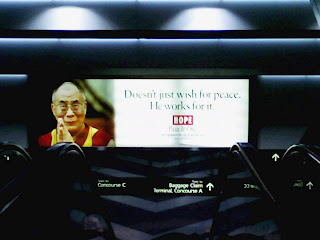 There I was rushing like a nut all over the airport to make sure I would make it to the meeting with the Dalai Lama early the following day, and I suddenly encounter him on a 15 foot high billboard. It made me laugh. The rest of the trip was fine.
Posted by Dean Radin at 7:08 PM 11 comments:

Email ThisBlogThis!Share to TwitterShare to FacebookShare to Pinterest
Labels: travel

I knew you were going to read this

Presentiment in the news.
Posted by Dean Radin at 11:50 AM 7 comments:

Try this link to see a new educational initiative from the Institute of Noetic Sciences: PsiWars.org