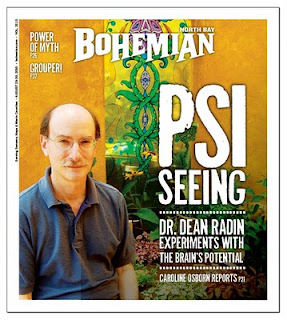 I'm the cover story for the North Bay Bohemian (the name seems appropriate for Northern California) newspaper. If you go here you can read the entire newspaper online, but I think this link will only last for one week.

Email ThisBlogThis!Share to TwitterShare to FacebookShare to Pinterest
Labels: http://www.blogger.com/img/blank.gif

How to win a million dollars

Let's say we want to win a million dollar prize for rigorously demonstrating something psychic in a scientifically acceptable way.

One of the best candidates at present is the ganzfeld telepathy experiment. In this study two people are isolated, one is given the job of the "sender," the other the "receiver." The receiver is placed into a mild, unpatterned sensory stimulation condition called the ganzfeld, which produces a dream-like, hypnagogic state. In this state the receiver is asked to verbally report any impressions which come to mind. Meanwhile the sender is shown a randomly selected target image or video clip, and asked to mentally send that material to the receiver. After a half-hour of sending, the receiver is taken out of the ganzfeld and asked to select one of four images based on his or her impressions. One of those images is the target, along with three decoys.

By chance, the receiver will choose the actual target one in four times, or a 25% chance "hit rate." Because the result of each session can only be a direct hit or a miss, there is no ambiguity and the results are clean and straightforward to evaluate.

During the test session, the experimenter and receiver are of course blind to the sender's target image, and all parties involved are sequestered under rigorous conditions designed to preclude cheating. Within this design there is no way that receivers can systematically guess the correct target by conventional means.

A session typically takes about an hour for the two participants. For the investigator it takes another hour to prepare and to close down the session.

Analysis of over 4,000 such sessions, conducted in labs around the world for four decades, indicates that, with ordinary people involved as subjects, the observed average hit rate is 32%. This is stupendously significant from a statistical point of view, and it constitutes strong, repeatable evidence for telepathy.

How could we use this effect to win the million dollar prize?

First, we do a power analysis to determine how many repeated sessions we have to run. Let's say for a million dollars we are required to achieve results associated with odds against chance of a million to one. That seems like a reasonable criterion for success. Much less than this the prize holder runs the risk of losing a million to a fluke. Much more and the test becomes impossible to achieve during any one person's lifetime, as we'll see.

We'll design an experiment that is run in three phases, where each phase has the same parameters: p(chance) = 0.25, p(hypothesis) = 0.32, alpha = 0.003, power = 0.99. This means that if we assume that telepathy gives us a hit rate of 32%, then if we run this experiment we'll have a 99% chance of getting a final p-value of 0.003 or better, i.e. good evidence for telepathy. The power analysis tells us that we need to run N = 1,147 trials to achieve this result. So now we will run this same experiment two more times, get a result each time at least as good as p = 0.003, and then the combined p-value over all three phases will be one in a million or better, or odds against chance of at least a million to one.

Say we pay each sender and receiver a modest $50 to help compensate their time and costs. So we need to budget $344,100 for participant compensation. And let's say we run one session per workday, and we pay our investigator $80 per hour. That comes to 688 weeks or 14 years of effort assuming we run the experiment 48 weeks per year. For the investigator (we'll assume one investigator, which is an underestimate), at two hours per session x 3441 sessions x $80, we end up with an investigator budget of $550,560.

Now we need a testing facility that provides exceptional security against cheating and will also allow independent observers, and perhaps the general public, to witness each session from afar. (Observers interested in monitoring this experiment are not going to camp out in the laboratory for 14 years to personally observe every session.) To do this, we could use a secure digital video recording system that streams encrypted data over the web to a secure site, and is also designed to detect any interception or tampering of the video record at the source, in transmission, or at the secure site. We will need at least three video streams to cover the sender, receiver, and investigator, and perhaps one or two more to survey the larger environment. So let's say we need five tamper-proof video streaming systems, a secure server, and expert consultants to ensure that the system is not only designed correctly, but is systematically re-examined to check for proper operation. Let's say all this costs $250,000 for the 14-year life of the project, which is undoubtedly a vast underestimate.

The testing facility itself should consist of two isolated chambers that are thoroughly shielded against any possible transmission of sensory cues, including sound, light, vibration, odor, magnetic or electromagnetic signals. This might cost $100,000. The cost of running the facility itself (air conditioning, electricity) might cost say $200 per week or $137,640 in total.

The total so far is $1,382,300, not including costs for independent analysis of the video, Internet bandwidth, storage costs, data analysis, etc. So, for the mere possibility of winning a million dollars, we're already deep in the red, not to mention the investment of 14 years of dedicated effort. In addition, to optimize the likelihood of success, we would want to recruit people who we think would perform well. Based on past studies this would be creative people (artists, musicians, etc.) who believe in telepathy because they've experienced telepathic episodes in their own lives, and/or siblings, spouses or friends who frequently experience telepathic-like connections. So we need an advertising and recruitment budget, and probably a travel budget as well to compensate selected participants who must travel to the testing facility.

In sum, based on the state of the science today, and based on decades of repeated experiments that give us some confidence on what to expect, I believe we could conduct an experiment that would win a million dollar prize (assuming we need odds against chance of a million to one). But from a pragmatic perspective it wouldn't be worth it. Even if it were possible to raise over a million to run the experiment in the first place (unlikely, unless a wealthy individual or foundation is interested in backing this project), this doesn't make either financial or scientific sense. It might generate some publicity for a day or two, but most people already believe in telepathy based on their personal experiences, so this would only be news to a small percentage of scientists who would raise an eyebrow for 10 minutes. And then they'd say "cool," and some of them would start working on explanatory theories. The hardcore skeptics, like flat-earthers and creationists, aren't convinced by evidence or prizes; they'll just go on believing whatever they want to believe.

If say, the X Prize Foundation, an organization with a good track record of offering clear challenges and criteria for success, were to establish a prize to demonstrate telepathy under rigorously controlled conditions, then I believe that the design I've sketched here would do the trick. For $10 million it would be worth it.
Posted by Dean Radin at 11:29 AM 33 comments: