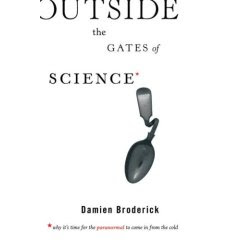 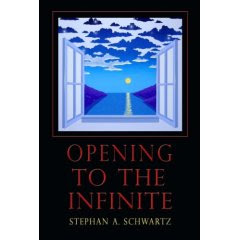 The first book is Outside the Gates of Science (why it's time for the paranormal to come in from the cold), by Damien Broderick. This is a comprehensive, accurate and well written examination of psi research by a critically-minded observer of the field who has done his homework.

Broderick is also author of numerous award-winning science fiction novels, and has a PhD in the comparative semiotics of science and literature.

The second is Opening to the Infinite, by Stephan Schwartz. Among other things, this book provides an answer to those who cannot accept the possibility of psi unless it has some pragmatic use. Schwartz's stories about practical applications of remote viewing is worth the price of this book, but he goes beyond that and offers a series of exercises, tips and techniques to allow the serious reader to experiment with remote viewing first-hand.

In a Newsweek excerpt of astrophysicist Neil DeGrasse Tyson's new book, Death by Black Hole, Tyson waxes eloquently about the wonder of our senses. Then he raises the question of the sixth sense and dismisses it with, "... the persistent failures of controlled, double-blind experiments to support the claims of parapsychology suggest that what's going on is nonsense rather than sixth sense."

Such a confident statement will no doubt impress some, but as readers of my blog know unfortunately this is an opinion borne of ignorance.
Posted by Dean Radin at 12:03 AM 7 comments:

Presentiment in the brain

This paper has been accepted in the Journal of Alternative and Complementary Medicine and will be published later in the year:

Models of the placebo effect: Investigating a possible retrocausal factor

Objective: Conventional models of placebo effects assume that all mind/body responses associated with expectation can be explained by ordinary causal processes. This experiment tested whether some placebo effects may also involve retrocausal, or time-reversed, influences.

Design: Slow cortical potentials in the brain were monitored while adult volunteers anticipated either a flash of light or no flash, selected with equal probability by a noise-based random number generator. Data were collected in individual sessions of 100 trials, contributed by 13 female and 7 male adult participants.

Outcome measures: Ensemble median slow cortical potentials one second prior to a light flash were compared with the same measures prior to no flash. A nonparametric randomized permutation technique was used to statistically assess the observed difference. EEG data were analyzed separately by gender.

Results: Females’ slow cortical potentials significantly differentiated before stimulus onset (z = 2.72, p = 0.007, two-tailed), and males showed a suggestive effect in the opposite direction (z = -1.64, p = 0.10, two-tailed). Examination of alternative explanations indicated that these effects were not due to anticipatory strategies, equipment or environmental artifacts, or violation of statistical assumptions.

Conclusions: This experiment, in light of previous studies showing similar, unconscious “presentiment” effects in humans, suggests that comprehensive models seeking to explain placebo effects, and in general how expectation affects the mind and body, may require serious consideration of transtemporal or retrocausal factors.

The following paper has been accepted for publication in Explore. It will appear later this year.

Testing nonlocal observation as a source of intuitive knowledge

This study explored the hypothesis that in some cases intuitive knowledge arises from perceptions that are not mediated through the ordinary senses. The possibility of detecting such “nonlocal observation” was investigated in a pilot test based on the effects of observation on a quantum system.

Participants were asked to imagine that they could intuitively perceive a low intensity laser beam in a distant Michelson interferometer. If such observation were possible, it would theoretically perturb the photons’ quantum wave-functions and change the pattern of light produced by the interferometer. The optical apparatus was located inside a light-tight, double steel-walled shielded chamber. Participants sat quietly outside the chamber with eyes closed. The light patterns were recorded by a cooled CCD camera once per second, and average illumination levels of these images were compared in counterbalanced “mental blocking” vs. non-blocking conditions. Interference would produce a lower overall level of illumination, which was predicted to occur during the blocking condition.

Based on a series of planned experimental sessions, the outcome was in accordance with the prediction (z = -2.82, p = 0.002). This result was primarily due to nine sessions involving experienced meditators (combined z = -4.28, p = 9.4 × 10-6); the other nine sessions with non- meditators were not significant (combined z = 0.29, p = 0.61). The same experimental protocol run immediately after 15 of these test sessions, but with no one present, revealed no hardware or protocol artifacts that might have accounted for these results (combined control z = 1.50, p = 0.93). Conventional explanations for these results were considered and judged to be implausible. This pilot study suggests the presence of a nonlocal perturbation effect which is consistent with traditional concepts of intuition as a direct means of gaining knowledge about the world, and with the predicted effects of observation on a quantum system.