In The Conscious Universe one topic I wrote about was an apparent lunar modulation of casino payout rates, which appeared to be related to other geocosmic modulations of psi. I conducted the casino analysis because I was fortunate enough to obtain a few years of payout data from a friendly General Manager of a Las Vegas casino. Unfortunately, it is exceptionally difficult to obtain casino data for research purposes, so after that book was published no one was able to independently confirm the lunar effect in casino data.

Now, in the current issue of the Journal of Parapsychology, Eckhard Etzold reports a successful conceptual confirmation and extension of the original observation, not in data from a casino but from an online retro-PK experiment:

SOLAR-PERIODIC FULL MOON EFFECT IN THE FOURMILAB RETROPSYCHOKINESIS PROJECT EXPERIMENT DATA: AN EXPLORATORY STUDY
Eckhard Etzold
ABSTRACT: Radin and Rebman (1998) claimed evidence of psychokinesis effects in casino payout rates depending on lunar phases. They found the peak effect in the full-moon interval. This paper reports on an experimental data evaluation of 199,632 retroPK experiment trials, covering eight years. The hypothesis of a full moon effect is tested with the large database of the Fourmilab RetroPsychoKinesis Project. An earlier test of these findings by the author, published in 2000, supported the full moon hypothesis. In additional tests with new data, published in 2002, the observed effect changed its sign and disappeared. Some researchers, including the author, suggested in the past an anomalous experimenter effect and assumed the consequences of the model of pragmatic information to be the real cause of these effects. But a new evaluation of the data revealed a significant retroPK solar-periodic relationship which indicates that actually physical parameters are responsible for the change of the full-moon effect in the mentioned intervals. The hypothesis is suggested that the moon’s interaction with earth’s magnetosphere during the moon’s passage through the magnetotail in full-moon times might modulate retroPK performance.
Posted by Dean Radin at 7:20 PM 8 comments:

An article I mentioned earlier in this blog describing an experiment involving chocolate has been accepted for publication, so I post the abstract below. I'll say more about this study when the paper is finally published, sometime later this year. Other articles presently under review include one describing the results of a triple-blind experiment on the effects of distant intention on water crystalization, another reporting an experiment examining effects of distant observation on the behavior of photons in an interferometer, and a third study involving examination of visual evoked EEG responses prior to randomly timed light flashes. I'll post the abstracts of those papers after they are accepted for publication.

Design: Individuals were assigned to one of four groups and asked to record their mood each day for a week using the Profile of Mood States. For days 3, 4 and 5 each person consumed a half ounce of dark chocolate twice a day at prescribed times. Three groups blindly received chocolate that had been intentionally “treated” by three different techniques. The intention in each case was that people who ate the chocolate would experience an enhanced sense of energy, vigor and well-being. The fourth group blindly received untreated chocolate as a placebo control. The hypothesis was that mood reported during the three days of eating chocolate would improve more in the intentional groups than in the control group.

Subjects: Stratified random sampling was used to distribute 62 participants among the four groups, matched for age, gender, and amount of chocolate consumed on average per week. Most participants lived in the same geographic region to reduce mood variations due to changes in weather, and the experiment was conducted during one week to reduce effects of current events on mood fluctuations.

Results: On the third day of eating chocolate mood had improved significantly more in the intention conditions than in the control condition (p = 0.04). Analysis of a planned subset of individuals who habitually consumed less than the grand mean of 3.2 ounces of chocolate per week showed a stronger improvement in mood (p = 0.0001). Primary contributors to the mood changes were the factors of declining fatigue (p = 0.01) and increasing vigor (p = 0.002). All three intentional techniques contributed to the observed results.

Conclusion: The mood-elevating properties of chocolate can be enhanced with intention.
Posted by Dean Radin at 6:12 PM 12 comments:

Opportunity: PhD with a focus on parapsychology from a major university

The Center for Research on Consciousness and Anomalous Psychology (CERCAP), under the direction of Etzel Cardeña PhD, encourages very bright psychology graduates interested in anomalous psychology (including psi) to apply to do a Ph.D. in psychology at the University of Lund, Sweden (ranked by Newsweek as one of the top 20 universities in Europe). Selection is very competitive but the top 2-3 students accepted into the department get free tuition and payment; about 3 others will get free tuition but will have to pay their way otherwise. The studies can be done in English. The application deadline (which requires a plan of studies) is April 15th. If you still have questions after reading the information linked below, please contact Prof. Cardeña. 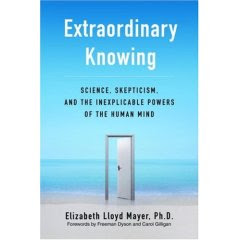 This is a new book by U Cal Berkeley clinical psychologist and psychoanalyst, the late Lisby (as she was known by her friends) Mayer. I highly recommend it. It describes her journey of discovery, from a skeptic who held the common academic opinion that psychic phenomena are delusional fantasies, to a reluctant but solidly reasoned acceptance that these phenomena are both genuine and important.

Lisby was the best kind of skeptic - she was solidly rational and well grounded, and as a clinician she specialized in discerning the many ways that we fool ourselves and each other. She was very skeptical of claims of "extraordinary" experiences, and yet driven by her own, undeniable experiences, and those of other people she trusted, she became determined to find out what was going on. Lisby systematically surveyed the literature, personally interviewed many of the principal researchers, and eventually concluded that while we still do not have solid explanations for these things, the phenomena are indeed real.

She was then forced to consider why these phenomena remain marginalized within science, especially given that substantial scientific evidence is available for anyone who cares to look for it. I found her conclusions most interesting because she tackled this puzzle from the eye of a trained psychoanalyst.