An issue of the Elsevier journal Explore: The Journal of Science and Healing, published in May 2007, was devoted to the Princeton Engineering Anomalies Research Laboratory's work. That entire issue is freely accessible and the articles therein can be downloaded from here.
Posted by Dean Radin at 1:44 PM 1 comment:

New insights into the links between ESP and geomagnetic activity

By Adrian Ryan, in the Journal of Scientific Exploration, Fall 2008

A database of 343 free-response ESP trials conducted at centers in the U.K. was constructed in order to test the hypothesis that the relatively fast varying components of geomagnetic activity, geomagnetic pulsations, might be driving the reported associations between ESP, geomagnetic activity and local sidereal time. Local geomagnetic field-strength measurements taken at 1-second intervals during 99 trials, and at 5-second intervals during 244 trials, were converted by fast Fourier transform into power within five frequency bands. Two patterns were observed: ESP was found to succeed only during periods of enhanced pulsation activity within the 0.2-0.5 Hz band, but ESP effect was absent during the most disturbed periods of activity in the 0.025-0.1 Hz band.

The pattern of ESP effect by local sidereal time was similar to that found by Spottiswoode (1997b), and this shape was found to be attributable to the pattern of ESP results by pulsation activity in the 0.2-0.5 Hz band.

The observed patterns were demonstrated to have excellent explanatory power in terms of accounting for findings previously reported in the literature.

Go here for the full paper
Posted by Dean Radin at 10:59 AM 8 comments:

I was selected as one of two "alumni leaders" in the Fall 2008 issue of Resonance, an alumni magazine published by the Department of Electrical and Computer Engineering at the University of Illinois, Champaign-Urbana. I've posted that page here.
Posted by Dean Radin at 6:19 PM 9 comments:

Telepathy on the brain

A new experiment looking for telepathy (or psi in general) in the brain, using an fMRI scanner, has been published in the International Journal of Yoga, by a group at the National Institute of Mental Health and Neurosciences, in Bangalore, India. I've posted a pdf copy of their study here.

The article is entitled "Investigating paranormal phenomena: Functional brain imaging of telepathy," by Ganesan Venkatasubramanian and others. With this new study, there are now four published psi studies using fMRI technology. Three of the four found significant areas of brain specialization correlated with psi performance.
Posted by Dean Radin at 4:00 PM 21 comments: 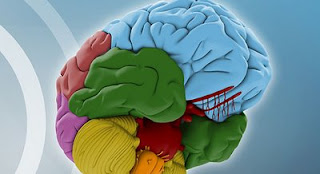 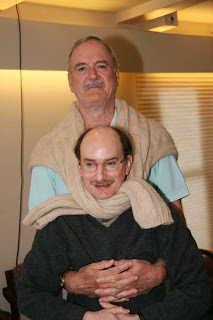 This is a funny shot of me and actor John Cleese, at a research seminar on survival of consciousness held at Esalen Institute a few years ago. John is as funny in person as in the movies.
Posted by Dean Radin at 12:16 PM 13 comments: