The possibility that information can be acquired at a distance without the use of the ordinary senses, that is by “extrasensory perception” (ESP), is not easily accommodated by conventional neuroscientific assumptions or by traditional theories underlying our understanding of perception and cognition. The lack of theoretical support has marginalized the study of ESP, but experiments investigating these phenomena have been conducted since the mid‐19th century, and the empirical database has been slowly accumulating. Today, using modern experimental methods and meta‐analytical techniques, a persuasive case can be made that, neuroscience assumptions notwithstanding, ESP does exist. We justify this conclusion through discussion of one class of homogeneous experiments reported in 108 publications and conducted from 1974 through 2008 by laboratories around the world. Subsets of these data have been subjected to six meta‐analyses, and each shows significantly positive effects. The overall results now provide unambiguous evidence for an independently repeatable ESP effect. This indicates that traditional cognitive and neuroscience models, which are largely based on classical physical concepts, are incomplete. We speculate that more comprehensive models will require new principles based on a more comprehensive physics. The current candidate is quantum mechanics.

The full paper is available at the online journal NeuroQuantology.
Posted by Dean Radin at 11:16 AM 20 comments:

This article in Psychology Today reports on Daryl Bem's new experiment on retrocausal effects (available on his website), in press in the Journal of Personality and Social Psychology. There are a few gaffs in the PT article, but overall it's quite positive.
Posted by Dean Radin at 11:32 AM 24 comments:

Another ganzfeld telepathy example with Gail and Tom. In this one Tom is the receiver. 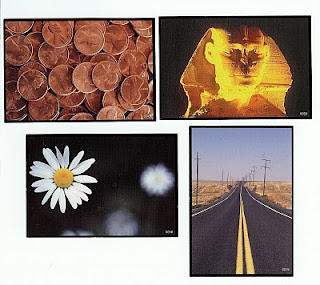 Here is the transcript of what Ray said during the 10 minute sending period:

Can you guess the target that Gail was sending? When Tom viewed the four images he immediately selected the correct target with high confidence. What this shows is that the words that Tom chose to describe his mental impressions were accurate, but they didn't quite capture his actual experience. That experience allowed him to, as he put it, "bet money" that his selection was correct. And he would have won that bet.
Posted by Dean Radin at 1:20 PM 12 comments:

This ganzfeld telepathy test was conducted with Gail and her friend Ray, on September 27th. 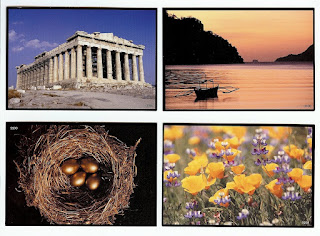 This is the target pool. One of these images was being sent by Ray, from a distance. Neither Ray nor Gail knew anything in advance about the composition of the pool, and Ray selected one of these four pictures randomly with a tossed die.

What follows is the transcript of Gail's spoken impressions during the sending period, which lasted about 10 minutes:

- - -
I see an image of Ray when he jumped off the waterfall in Hawaii. Green. Swaying. I feel like I'm swaying. Palm Trees. Motion. I keep feeling like a lot of motion. Something solid and rectangular. Alive. Kinda...Jungle-y. Now my image changed to sort of like a port, but I feel like it's an analytical overlay. We were just talking about shipping so I'm not sure, all of a sudden I felt like I was at a port,
or a busy place or... Somewhere that felt like by, with water and industry. Hot.

Ray?! [At this point Gail felt that Ray's attention was wandering.]

Continuing with images of water or when I say like a sway or a wave, or some kinda flowing in and out feeling. I feel blues and whites. I'm not sure why I'm seeing an image of a stick of butter. But just that same shape again where I'm seeing a long, oblong... Before I felt like the oblong shape was standing upward and now I'm seeing it more like a train, you know, like a long train kind of a shape.

I'm hearing flower essence in my mind, flower essence. I see sort of a green leathery leaf. I guess I would draw a shape to go with that. A happy feeling.

Now all of a sudden, I just saw, I don't know, a metal structure, you know, like intricacies of a metal structure, that you would see like in an Eiffel Tower or a bridge or some sort of intertwining metal things. Repeated design, or repeated. I'm not sure.

I just saw some horses galloping by, again, the same thing about swift. Something about just the mane blowing in the wind, or the hair. Something about the swift and swaying feeling of motion. I seem to be traveling from a tropical feeling to a sort of a farm feeling. Seems kinda busy. I still have to go back to my rectangular oblong shape. I don't know if stick-of-butter yellow has something to do with the color. Hands ... keep feeling like I'm holding something.

- - -
After the sending period, when Gail was trying to match her impressions to the target, she immediately rejected two of the pictures and kept vacillating between the actual target and one of the decoys. She first selected the target, then changed her mind, and went back and forth several times, ending up by selecting the decoy.

Can you guess which picture was the target that Ray was sending?