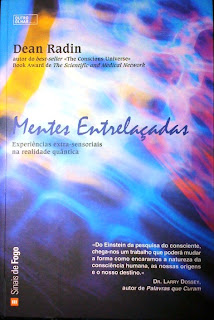 Email ThisBlogThis!Share to TwitterShare to FacebookShare to Pinterest
Labels: books

Behind and Beyond the Brain 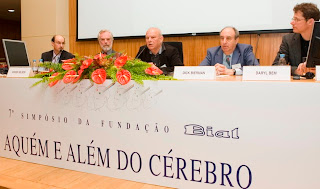 Here are a few pictures from the Bial Foundation conference, Behind and Beyond the Brain, which took place during the last few days of March in Porto, Portugal. This picture is during a panel discussion held after the second day's main session, on the theme of emotions and psi. From the left it's me, Roger Nelson, Dick Bierman, Daryl Bem and Stefan Schmidt.

Here I am on the final panel discussion at the end of the conference, with moderator Fernando Lopes da Silva, Ralph Adolphs and Paul Ekman.


One thing that struck me during this conference, which was about two-thirds on the cognitive and social neurosciences and one-third on psi, was how similar the practice of today's neurosciences are to what I used to do when I was an electrical engineer (EE): reverse engineer black boxes. As an EE I would figure out how electronic devices worked by tracing circuits, injecting signals, studying the operation of components both in and out of the circuit, and in general see how changes in the circuit affected the behavior of the black box. This is what the neurosciences are doing with animal and human brains, and much of the internal circuitry is slowly and surely being worked out. The undeniable explanatory power of this approach is seductive, and much of it is probably correct.


However, the seduction also tends to blind us to annoying anomalies that don't fit a mechanistic, physicalist model (like psi, NDEs, evidence suggestive of reincarnation, etc.). That said, I am not a fan of so-called non-materialistic, non-physical, or dualistic models of psi. My guess is that as today's concept of "physical" continues to evolve (which includes our understanding of basic ideas like space, time, matter and energy), we will find the neurosciences and psi converging towards a model of consciousness which is partially localized (brain-based) and partially nonlocalized (an inherent property of the fabric of reality, as in panpsychism).

Another thought I had while listening to the neuroscience talks was that most neuroscientists assume that classical physical explanations are sufficient to account for brain-based behavior and experience. Deeper explanations of physical processes, such as quantum models, are not viewed as being either necessary or relevant. The problem with this assumption is that classical descriptions are not simply approximations of the microworld, which is where most of the action occurs in the brain, such descriptions are fundamentally wrong.

If an EE was tasked with understanding an unknown, complex electrical circuit, but only knew about classical principles, he or she would probably figure out some simple aspects of the circuit, but the details would remain exceedingly mysterious. By comparison, I suspect that what might be called "classical neuroscience" will continue to make some progress in understanding relatively simple aspects of the brain, but many details (and especially the anomalies) are likely to remain mysterious.
Posted by Dean Radin at 4:47 PM 27 comments:

Email ThisBlogThis!Share to TwitterShare to FacebookShare to Pinterest
Labels: conference

I just spent a week in Porto, Portugal, at the 7th biannual symposium of the Bial Foundation. This unique Foundation is supporting perhaps 80% of the world's experimental psi research, and it also supports mainstream studies in psychophysiology and the neurosciences. The symposium brings together researchers from all these domains, and the three-day conference is unusually eclectic and interesting. This one was no different -- the theme was emotion, and there were some very interesting presentations about the neuroscience, cognitive and social science of emotions, as well as a half day of talks on psi and emotion.

I discovered at the meeting that the Portuguese translation of Entangled Minds was published last year, so I bought a copy. I'll post more about this meeting, perhaps including some pictures and videos I took in Portugal, when I return home. (I'm writing this from Dulles airport near Washington DC, waiting for a flight.)
Posted by Dean Radin at 4:45 PM 4 comments: