This clip from the TV show, The Big Bang Theory, could be a documentary of my life, although as an empiricist I spend somewhat more time collecting and analyzing data, and then staring at computers, rather than staring at equations on whiteboards. But I can easily stare at an analysis for a few days too, so this scene isn't all that far off.
Posted by Dean Radin at 12:10 AM 10 comments: 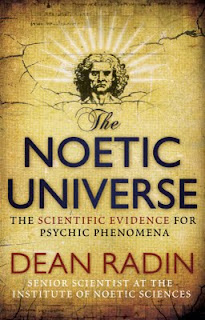 This is the cover of a reprint of The Conscious Universe, to be published in the UK soon. I wrote a new Preface for this book, which is aimed to ride the wave of interest in noetic science as a result of Dan Brown's The Lost Symbol.

Publishers often look for books that accommodate the public's request for more information on certain topics, and that's what happened here. I approved the publisher's recommendation for the revised title and new book jacket (which I like much more than the original jacket with the silly floating spoon!).
Posted by Dean Radin at 3:56 PM 26 comments:

This is an excellent video talk on quantum mechanics and consciousness, by astrophysicist Bernard Haisch, given at the Society for Scientific Exploration meeting in July 2009 .
Posted by Dean Radin at 4:17 PM 3 comments:

Abstract - An experiment tested whether mental coherence entrained in groups would affect sequences of data generated by truly random number generators (RNGs) in the vicinity of those groups. Coherence was entrained by having groups listen to a prescribed series of binaural-beat rhythms during a 6-day workshop. Two RNGs based on electronic noise and one on radioactive decay latencies were located in the building where the workshops took place. Random data were continually collected from these RNGs during 14 workshops. As controls, the same RNGs generated data in the same locations and times but during 8 weeks when no workshops took place. Other RNGs in two distant locations were run as additional controls.

An exploratory hypothesis predicted that fluctuations in entrained mental coherence associated with the workshop activities would modulate the random data recorded during the workshops. This was predicted to result in positive correlations between random data streams collected from one workshop to the next. Results showed that during the workshops the overall correlation was positive, as predicted (p = .008); during control periods the same RNGs produced chance results (p = .74). Random data generated in distant locations also produced results consistent with chance."