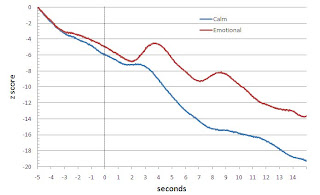 I do an interview for a documentary film or TV show typically once or twice a month. Occasionally the director wants to film a demonstration of a test in the lab, and one of the options I offer is a presentiment experiment using a skin conductance level (SCL) measurement. About half the time the director or producer decides to do the test him or herself.

I noticed some years ago when I started doing these demo experiments that they often resulted in pretty good results, which I found surprising because the set and setting of interviews are not nearly as well controlled as actual experiments. But starting this year, out of curiosity, I decided to keep a closer eye on the outcomes of those demos.

The image here shows the composite results after running four presentiment demos this year, so far. This is not based on a selection of results -- this is all the data from the four demos. There was one demo per interview, and each demo consisted of 40 randomly selected images out of a pool of about 700 images, for a total of 160 targets of widely varying emotionality. The trials were partitioned based on a median split of the emotionality ratings of the 160 trials, so the 80 targets rated as being most arousing (based on the international standard rating per image) were defined as emotional, and the bottom 80 target were defined as calm.

Each trial was normalized to allow the emotional and calm trials to be easily pooled across all four sessions, so the y axis is in terms of z scores (standard normal deviates). The difference in the two curves prior to the stimulus (i.e., the moment the target is selected and shown, at second 0) is not quite statistically significant, mainly because with 160 trials there is insufficient statistical power. But the differential effect is in alignment with the results that I and others have obtained in previous experiments.

What it shows is that about 3 seconds before the stimulus is randomly selected, the SCL measurement begins to differentiate according to the future target selection. A few people have misinterpreted what's going on here. What presentiment predicts is that prior to a randomly selected emotional target SCL should become more aroused than prior to a randomly selected calm target. This only means that the ensemble emotional curve is predicted to be higher than the ensemble calm curve, and not that the emotional curve will necessarily go into positive territory.
Posted by Dean Radin at 11:32 PM 39 comments:

The National Science Foundation publishes a biannual report called Science and Engineering Indicators. It's a comprehensive review (588 pages in the 2008 report) of developments in the US relevant to science and engineering, including a section on the public understanding of science. I've been tracking this report for years to see how the NSF views what it regards as "pseudoscience." That word first appeared in its 2000 report.

Exemplars of pseudoscience in that year's report included "yogic flying, therapeutic touch, astrology, fire walking, voodoo magical thinking, Uri Geller, placebo, alternative medicine, channeling, Carlos hoax, psychic hotlines and detectives, near death experiences, UFOs, the Bermuda Triangle, homeopathy, faith healing, and reincarnation." For a section of an NSF report supposedly concerned with the lack of critical thinking skills, this is one of the most peculiar, and as such inadvertently ironic, lists I can imagine. Surely it should have also included Santa Claus and Batman.

References in this section clearly cite as their source the rabidly skeptical society formerly known as CSICOP. Not surprisingly, the wording makes it appear that belief in such pseudosciences indicates that the US educational system is devolving dangerously into a hellish middle ages. A footnote in the 2000 report cites as evidence of this mental decline the "'most frightening” results of a poll of students in Columbia’s graduate school of journalism: 57 percent of the student journalists believed in ESP."

Three pages of this report are devoted to such arguments. The author's disdain for the woefully ignorant masses (apparently including grad students at Columbia) is palpable.

The 2002 report also devotes about three pages to a discussion of pseudoscience, and again, you can practically feel the author's veins throbbing as you read through this section. Fortunately (for the sake of the NSF's credibility), the word "placebo" is no longer provided as an example of pseudoscience, nor is "Uri Geller." In the 2004 report this section shrinks to about one page and is not quite as strident. In the 2006 report the pseudoscience list again shrinks, now to less than a page, and it cites as examples of pseudoscience only "astrology, lucky numbers, the existence of unidentified flying objects (UFOs), extrasensory perception (ESP), and magnetic therapy."

The 2008 report shrinks to two paragraphs and only gives astrology as an example.

This trend is the right direction, and the hysterically skeptical tone in earlier reports seems to be calming down. I take this as a favorable sign. I'm completely in favor of improved science education, which should include not just critical thinking, but also how to tell the difference between skepticism and pseudoskepticism. A few lessons on humility might not hurt either.
Posted by Dean Radin at 10:14 PM 11 comments: